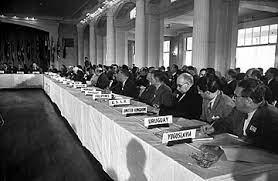 The Bretton Woods Conference gathered 730 delegates from all 44 Allied nations at the Mount Washington Hotel, situated in Bretton Woods, New Hampshire, United States, to regulate the international monetary and financial order after the conclusion of World War II.

After legislative ratification by member governments, agreements were signed that established the International Bank for Reconstruction and Development (IBRD), later part of the World Bank Group and the International Monetary Fund (IMF). This led to what was called the Bretton Woods system for international commercial and financial relations.

(1) Articles of Agreement to create the IMF aimed to promote stability of exchange rates and financial flows.

(2) Articles of Agreement to create the IBRD, whose purpose was to speed reconstruction after the Second World War and foster economic development, especially through lending to build infrastructure.

(3) Other recommendations for international economic cooperation. The Final Act of the conference incorporated these agreements and suggestions.

Within the Final Act, the most important part in the eyes of the conference participants and for the later operation of the world economy was the IMF agreement.

Its major features were:

All member countries were required to subscribe to the IMF's capital. Membership in the IBRD was conditioned on being a member of the IMF. Voting in both institutions was apportioned according to formulas giving greater weight to countries contributing more capital ("quotas").