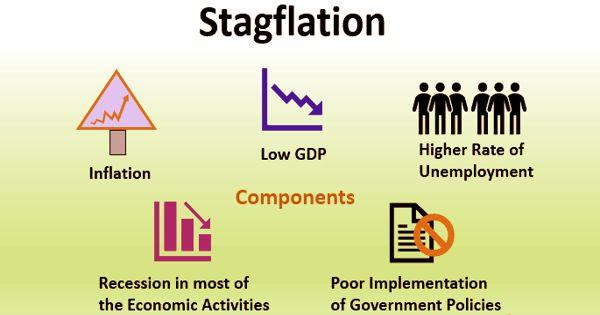 Stagflation is characterised by slow economic growth and relatively high unemployment—or economic stagnation—which is at the same time accompanied by rising prices (i.e., inflation). Stagflation can be alternatively defined as a period of inflation combined with a decline in the gross domestic product (GDP).

The term "stagflation" was first used in the 1960s during economic stress in the United Kingdom by politician Iain Macleod while speaking in the House of Commons. Talking about inflation on one side and stagnation on the other, he called it a "stagnation situation." It was later used again to describe the recessionary period in the 1970s following the oil crisis when the U.S. underwent a recession that saw five quarters of negative GDP growth. Inflation doubled in 1973 and hit double digits in 1974; unemployment hit 9% by May 1975.

Stagflation led to the emergence of the misery index. This index, which is the simple sum of the inflation rate and unemployment rate, served as a tool to show just how badly people felt when stagflation hit the economy.

Stagflation was long believed to be impossible because the economic theories that dominated academic and policy circles ruled it out of their models by construction. In particular, the economic theory of the Phillips Curve, which developed in the context of Keynesian economics, portrayed macroeconomic policy as a trade-off between unemployment and inflation.

As a result of the Great Depression and the ascendance of Keynesian economics in the 20th century, economists became preoccupied with the dangers of deflation. They argued that most policies designed to lower inflation tend to make it tougher for the unemployed, and policies designed to ease unemployment raise inflation.

The advent of stagflation across the developed world in the mid-20th century showed that this was not the case. As a result, stagflation is a great example of how real-world economic data can sometimes run roughshod over widely accepted economic theories and policy prescriptions.

Since that time, as a rule, inflation has persisted as a general condition even during periods of slow or negative economic growth. In the past 50 years, every declared recession in the U.S. has seen a continuous, year-over-year rise in consumer prices. The sole, partial exception to this is the lowest point of the 2008 financial crisis—and even then, the price decline was confined to energy prices while overall consumer prices other than energy continued to rise.

Because the historical onset of stagflation represents the demise of the dominant economic theories of that time, economists have put forth several arguments as to how stagflation occurs or how to redefine the terms of existing theories to explain it.

One theory state that stagflation is caused when a sudden increase in the cost of oil reduces an economy's productive capacity. In October 1973, the Organization of Petroleum Exporting Countries (OPEC) issued an embargo against Western countries. This caused the global price of oil to rise dramatically, increasing the costs of goods and contributing to a rise in unemployment.

Because transportation costs rose, producing products and getting them to shelves became more expensive, and prices rose even as people were laid off. Critics of this theory point out that sudden oil price shocks like those of the 1970s did not occur in connection with any of the simultaneous periods of inflation and recession that have occurred since then.

Another theory is that the confluence of stagnation and inflation are results of poorly made economic policy. Harsh regulation of markets, goods, and labor in an otherwise inflationary environment are cited as the possible cause of stagflation. Some point to former President Richard Nixon's policies, which may have led to the recession of 1970—a possible precursor to the period of stagflation.

Nixon put tariffs on imports and froze wages and prices for 90 days to prevent prices from rising. The sudden economic shock of oil shortages and rapid acceleration of prices once the controls were relaxed led to financial chaos.

While appealing, like the previous theory, this is an ad-hoc explanation of the stagflation of the 1970s, which does not explain the simultaneous rise in prices and unemployment that has accompanied subsequent recessions up to the present.

Other theories point to monetary factors that may also play a role in stagflation. Nixon removed the last indirect vestiges of the gold standard and brought down the Bretton Woods system of international finance.

This removed commodity backing for the currency and put the U.S. dollar and most other world currencies on a fiat basis, ending most practical constraints on monetary expansion and currency devaluation.

Proponents of monetary explanations of stagflation point to the ending of the gold standard and the countervailing historical record of extended periods of simultaneously decreasing prices and low unemployment under robust commodity-backed currency systems.

This would suggest that under an unbacked fiat monetary system since the 1970s, we should expect to see inflation persist during periods of economic stagnation, as has indeed been the case.

Even before the 1970s, other economists criticised the idea of a stable relationship between inflation and unemployment based on consumer and producer expectations about the rate of inflation. Under these theories, people simply adjust their economic behaviour to rising price levels either in reaction to—or in anticipation of—monetary policy changes.

As a result, prices rise throughout the economy in response to expansionary monetary policy without any corresponding decrease in unemployment, and unemployment rates can increase or fall based on real economic shocks. This implies that attempts to stimulate the economy during recessions could simply inflate prices while having little effect on promoting real economic growth.

Urbanist and author Jane Jacobs saw the disagreements between economists on why the stagflation of the ‘70s occurred in the first place as a symptom of misplacing their scholarly focus on the nation as the primary economic engine as opposed to the city. She believed that to avoid the phenomenon of stagflation, a country needed to provide an incentive to develop "import-replacing cities"—that is, cities that balance import with production. This idea, essentially diversifying the economies of cities, was critiqued for its lack of scholarship by some but held weight with others.

The de facto consensus on stagflation among most economists and policymakers has been to redefine what they mean by the term “inflation” in the modern era of modern currency and financial systems. Persistently rising price levels and falling purchasing power of money—i.e., inflation—are assumed as a basic, background, normal condition in the economy during periods of economic expansion and recessions.

Economists and policymakers generally assume that prices will rise and primarily focus on accelerating and decelerating inflation rather than on inflation itself. The dramatic episodes of stagflation in the 1970s may be a historical footnote today, but since then, simultaneous economic stagnation and rising price levels, in a sense, make up the new normal during economic downturns.

Stagflation is characterised by slow economic growth and relatively high unemployment—or economic stagnation—which is at the same time accompanied by rising prices (i.e., inflation). Generally, stagflation occurs when the money supply expands while supply is constrained.

Why Is Stagflation Bad?

Stagflation is a contradiction as slow economic growth would likely lead to increased unemployment but should not result in rising prices. This is why this phenomenon is considered harmful—an increase in the unemployment level results in a decrease in consumer spending power. If you tack on runaway inflation, that means that what money consumers do have is losing value as time goes by—there is less money to spend, and the value of the money is in decline.

What Is the Cure for Stagflation?

There is no definitive cure for stagflation. The consensus among economists is that productivity has to be increased to the point where it would lead to higher growth without additional inflation. This would then allow for the tightening of monetary policy to rein in the inflation component of stagflation (that is easier said than done, so the key to preventing stagflation is to be highly proactive in avoiding it).

What Is an Example of Stagflation?

An example of stagflation is when a government prints currency (which would increase the money supply and create inflation) while raising taxes (which would slow economic growth)—resulting in stagflation.